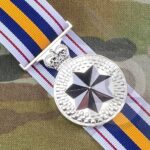 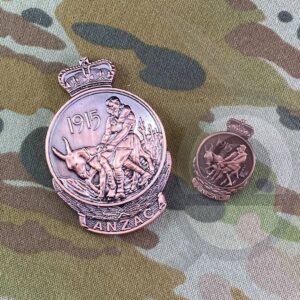 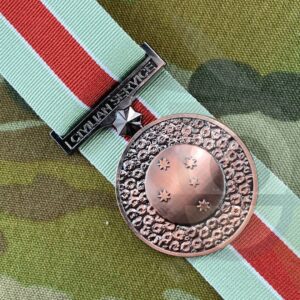 The medal is  nickel plated, with the St Edwards Crown, representing the Sovereign whom all Australian police officers ultimately serve, is located on the suspender bar. The front (obverse) of the medal features the Federation Star located inside an unbroken circular chequered band, known as Sillitoe Tartan. The Federation Star represents the national scope of the medal, while the Sillitoe Tartan is the internationally recognised symbol of policing. The unbroken band surrounds the star, signifying the unity and cooperation between each of the individual state, federal and territory police forces who together protect the entire Commonwealth. The back (reverse) of the medal has two sprays of golden wattle, the national floral symbol, located immediately below a raised horizontal panel on which the recipients details can be engraved. The words FOR SERVICE AS AN AUSTRALIAN POLICE OFFICER appear in capital letters around the inside of the outer rim. in the course of their police service.

The ribbon has a central panel of three stripes of dark blue, gold and dark blue. The central panel is flanked by white panels, each bisected by a thin red stripe. Blue and gold are Australia’s heraldic colours, commonly used in the ribbons of Australian medals, while the blue and white are colours traditionally associated with police and police awards. The thin red stripes represent the ever-present hazards experienced in service as an Australian police officer.