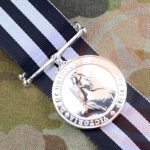 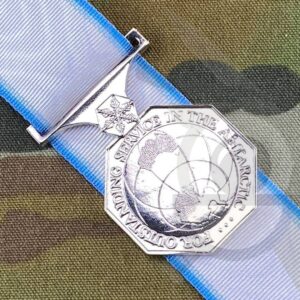 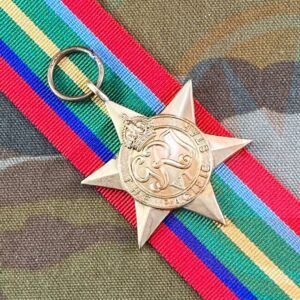 In England, the qualifying time is now twelve years instead of fifteen.

A bar is awarded for each additional five years of service. The bars are of the slip-on type, silver, laurelled with a St. John Cross in the centre.

The medal is a circular, cupro-nickel, rhodium-plated medal (silver in colour), 1.5 inches (38 mm) in diameter. The obverse features a crowned, veiled effigy of Queen Victoria, facing right, is displayed on a circular field with a beaded edge. The legend: VICTORIA + 1 + G + BRITT + REG + F + D + IND + IMP appears between the beaded circle and the raised edge of the medal. The reverse shows the Royal Arms within the Garter bearing the legend HONI SOIT QUI MAL Y PENSE. Above this is an Imperial Crown and below it the Prince of Wales’ Feathers. On each side is the badge of the order, each bearing a shield, one on the left charged with the arms of the order and that on the right with the arms of the Prince of Wales.

The whole device rests upon a sprig of St. John’s Wort. This central motif is surrounded by a border bearing the words: MAGNUS PRIORATUS HOSPITAL SANCTI JOHANNIS JERUSALEM IN ANGLIA. The suspender is a single-toe claw with inward scrolls which attaches to a straight bar. The riband is 1.5 inches (38 mm) wide, and consists of five equal stripes: black, white, black, white and black.

A single stitch of white appears at each edge. A miniature silver St. John Cross is worn in undress for each bar up to three. At four bars, one cross of rolled gold is worn. The medal is currently issued unnamed, but prior to 1970, the recipient’s name was engraved on the rim. The medal has been awarded in England from 1898 to the present.